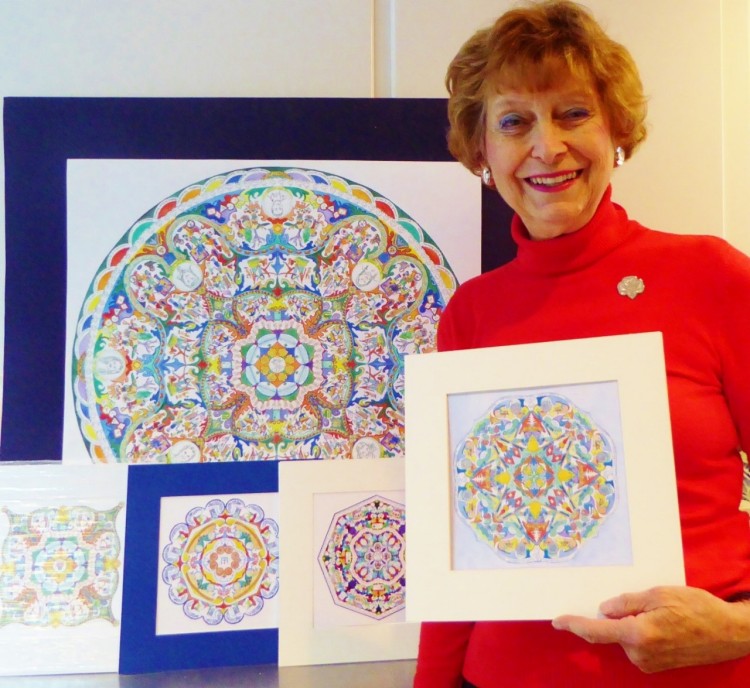 I grew up in Highland Park, Illinois and I come from a Girl Scout family. When I was 17 years old, I was selected to go to Our Chalet, a World Association of Girl Guides and Girl Scouts (WAGGGS) World Centre in Adelboden, Switzerland for a Juliette Gordon Low Session. It was 1954, and I was chosen to be one of 18 young women who were Girl Guides or Girl Scouts in different countries. I went through a series of complicated interviews and I was selected as one of five women from the United States to go to Switzerland for three weeks.

When the letter arrived saying I had been selected, my mother brought it to me in the lunchroom at school, and the whole cafeteria erupted in cheers. It was such a big deal to have the opportunity to see the world at that time. Our mission was to learn about different cultures and create international friendships. It was pretty intense, because different languages had to be accommodated for us to have these discussions. Because there were no cell phones or email back then, we did all the planning in advance by mail.

When I arrived, after a long ride on the S.S. United States ocean liner, I discovered that we came from seven countries and spoke eight languages from around the world. There were people from the United States, Italy, Germany, Brazil, Pakistan, Finland, and Sweden. Everyone would sit next to someone who could translate from their language into another language. We would give presentations and then explain them to each other in what must have looked like a large game of telephone. We had varying degrees of language skills, and there were lots of giggles over the translations.

Many dignitaries visited and spoke to us, and it was quite formal. We raised the flag every day, we talked about what service meant, and we talked about peace. We regularly recited the Girl Scout Promise and the Girl Scout Law. On Sunday evenings, we had Girl Scouts’ Own ceremonies instead of religious services. We chose a theme and had a quiet time with inspirational poems on the theme. As a group, we had pot luck dinner parties where we cooked our dinner over campfires. I brought a ham, and it was a complicated process to haveit delivered to Our Chalet. It was right after the war, and meat was hard to come by, so the ham was a big hit. After dinner we would sit around the campfire, and everyone knew the same songs.

Our Chalet is in the Alps, so we went on hikes, played compass games, helped the neighbors rake hay, and spent the night in a barn with cows where cheese was being made. Before we came home, Girl Scouts sent us around Europe on a tour, which sparked a lifelong passion for travel. London was still bombed out from World War II when we visited. I have been to 101 countries now, and I still think that Switzerland is the most beautiful place in the world.

My experience was idyllic, but full of adventure. My suitcase got lost on the way to Switzerland, so early in the trip I went hiking in a green corduroy suit with a skirt. I spoke with one woman on the trail that day about not having any clothes and she made me an outfit that night.

The experience propelled all of us to new heights of understanding and travel. Nine years later, I led a similar program at Our Cabana in Cuernavaca, Mexico. There were 25 girls from 10 countries in that group. But it was my Switzerland experience that started it all for me and changed the lives of everyone involved. We had one girl from Australia who was struggling in school, but because of the confidence she gained from this experience she went on to earn a PhD in psychology, teach medical school, and serve in the Cabinet of Australia.

One of the women spent her career advocating for the handicapped, testifying before Congress about handicapped parking. Another became a child psychologist, spent time working in VA hospitals, and was the director of health for the state of Washington. There are teachers, lawyers, and doctors—they’re all people who made a difference in the world, and they brought Girl Scout values to whatever they did. Now that they’re retired, they’re doing wonderful volunteer work all over the world.

Over the last 65 years, we’ve had newsletters the whole time—sometimes once a year, sometimes more often. Every five years we meet somewhere in the world, and I’ve hosted many reunions at my house. Girl Scouts from generations after ours are also close, and they travel around to see each other just like we do.

There are only three of us left who are in good health, and we still go hiking together. My Girl Scout experience in Switzerland brought so much to my life, and it introduced me to travel. After retirement, I became a watercolor artist and I have 60 products with my artwork on them, from clothing to paper and household goods. I did a watercolor kaleidoscope for Our Chalet, and one for Our Cabana, and it feels wonderful to have something I created hanging in those places that meant so much to me.

I’m 82, and I’m still awed by having had this experience.

Want to visit Our Chalet or Our Cabana? Learn more about WAGGGS World Centres.