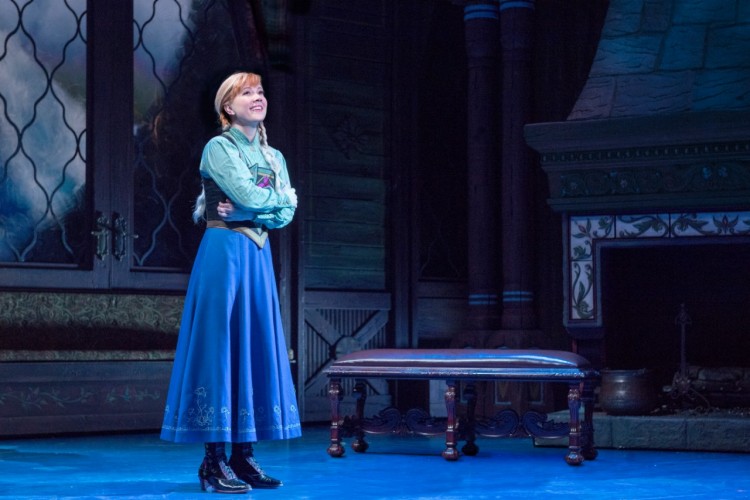 Ask Patti Murin, the Broadway star currently playing Anna in Frozen: The Musical at the St. James Theatre in New York City, and she’ll tell you her best advice is to put your heart, passion, and strength into everything you do.

“In my business, you’ll go on an audition and you’ll get ghosted all the time,” she says. “That’s why I always say that you should want to do this so much that you’re sure you’d rather be doing this than anything else. And you should stay attuned to what is truly going to make you happy in your life.”

Patti says there’s nothing like the electricity that comes from performing, and though it’s a grueling schedule—Patti performs eight shows a week—she loves the energy that comes from live theater.

“Even though we’re saying the same lines and singing the same notes, that live energy I get from the audience is what I love most,” she says. “Whether our audience is made up of high school students or adults who are more attuned to the subtle humor of the show, it feels like we never perform the same show twice!”

And while she’s at the top of her game—she’s played the role of Anna since Frozen opened in March 2018—she feels it’s her responsibility to speak up about real issues facing women today.

Patti uses her social media presence as a platform to speak up about her personal experience with anxiety and depression. (“Even Disney princesses are terrified sometimes,” she is quoted as saying.) Through sharing her experiences, she tries to help others facing the same issues.

“I’ve always liked connecting via social media but when I discovered I had this platform through the show, I realized I could try to be an advocate for mental health since this is something I’ve been through,” she says. “I want to connect with my followers and fans and I always hope whoever is connecting with me might be helped by what I’m writing.”

Finding friends to lean on is something Patti says she found as a Daisy, Brownie, and Junior.

“Girl Scouts is how I made my close friends and the way a lot of my friend groups were formed,” says Patti, who grew up in Hopewell Junction, New York.

The best parts of being a Girl Scout, for her, were all the new activities she had the opportunity to try with her troop, from camping to glamping, arts and crafts, and even singing.

Today, she believes that personal growth is the key to happiness as an adult, too.

“Make a choice to keep exploring yourself and what makes you happy and what fills you up and makes you feel like a good human,” she says. “Always keep moving forward.”