How to Be Your Own Cheerleader 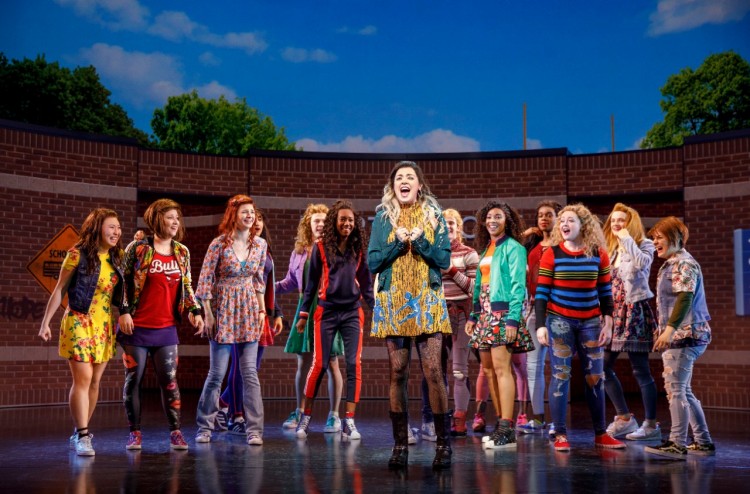 It’s no surprise that Collins Conley sounds upbeat when she talks about her career: she has lived out a lot of her childhood fantasies over the last few years, from performing in the original cast of a Broadway show to dancing in the Macy’s Thanksgiving Day Parade and singing at the Tony Awards.

She’s naturally vivacious, but she earned some of her confidence the hard way. “Because of some really bad relationships—both friendships and romantic relationships—I realized that I couldn’t spend time trying to make people love me who weren’t going to,” Collins says.

“I was embarrassingly, unabashedly myself in middle school,” says the California girl, who now plays Lizzie Therman and Caroline Krafft in Mean Girls on Broadway. “Then, as you age through high school and college you learn that people see you in a certain way and in this industry that doesn’t lessen, it only gets worse. You can either feel bad about what you’re not or own who you are.”

Several years into her career, Collins has found a self-confidence that both centers her and allows her to pursue her goal of always supporting other women. She traces that idea back to her days in Girl Scouts.

“One of my biggest memories of being a Brownie was selling cookies at a stand outside the local grocery store. Three of us did it together and I remember the teamwork and supporting and encouraging the other girls,” she says.

“Especially today, women supporting women is so important. When I’m at an audition, and we’re all doing this crazy combo that we learned in 15 minutes, I know that we’re all trying to do our best … so why not applaud those around me?”

1. Lean into your strengths.

Offer the world the best version of yourself, rather than trying to be something you’re not.

“I’m tall and I look young … I can only bring what I have to offer. For example, I am a great tapper. So instead of going to ballet calls I use what I have to my advantage,” she explains, adding, “I am a super bubbly person so instead of trying to tame it down or worry about if other people aren’t into that, I try to make that as strong as possible.”

2. Don’t compare yourself to others.

“Living in New York and auditioning with the same 300 girls every day, you compare yourself to all these people.”

3. Surround yourself with the right crew.

Searching for the people who like you the way you are and who allow you to be yourself openly isn’t just great for your self-esteem—it’s great for your career.

“Having that positive input will encourage you to stay on that personal journey,” says Collins. “I’m definitely not perfect. There are days when I don’t feel that self-assured, and it is really hard. And It depends on the room but, in my experience, I have had wonderful groups of women in my auditions and I have had a really great experience. As more and more women bring in their positive energy, it brings more positivity back to you.”

4. When you have the opportunity to work for your role models, take it.

“The coolest part of [being in Mean Girls] is working with Tina [Fey, the writer], who is such a strong, powerful female voice. As part of the original cast, I was in the rehearsal room with her every day. We worked with her for four months in D.C. and then for months on Broadway. And your first three weeks on Broadway you get a new script every morning. It’s still an evolving process—now whenever we get a new person in the cast, [Tina] comes in and tweaks things.”

5. Don’t expect to have all the answers to your future.

“I did The Prom, and when Mean Girls came along, it’s the same director and choreographer, so I knew wanted to do it. But sometimes you’re just going where the work takes you. Especially as an ensemble member.”

6. Understand that when you find your place, you’ll know it.

“After college, I taught dance in Indiana and worked at a science museum where I did kids’ outreach programs for a year … and then I decided that it was time to move to the city. I don’t know how—when I got here, I felt so calm and so at peace,” she explains. “I felt like I was pursuing my dreams and I was where I was supposed to be.”