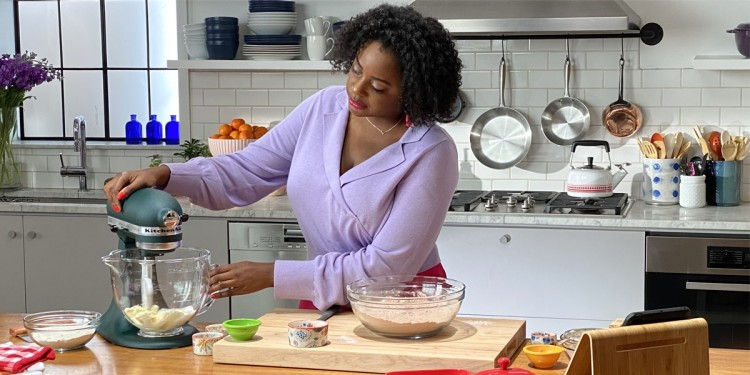 Though Vallery started her career as a lawyer, she realized that sweets are her true passion.

“Sometimes we get funneled down this path of what we studied in college,” she says. “But baking was something I wanted to try, even though baking with my mom and my grandmothers for the holidays was my only experience.”

Vallery learned a lot by leaving the legal profession to pursue her interests in the world of pastry.

“If there is something you have a passion for—something that you have a dream of doing, you don’t have to start with all your ducks in a row,” she says.

Here’s some of her advice on navigating midcareer transitions.

“I would bake something new when I wasn’t in class,” Vallery explains. “It was how I spent my free time.”

“The first year I started blogging, I was still at USC [Gould] law school,” she says. “I took a class at a local community college in decorating with buttercream. I learned how to use a piping bag really well.”

But even more important than the skills she gained was the realization of just how much she enjoyed working with desserts.

“It was me showing myself that this is something I wanted to invest in and do,” she says. “The class was short, but I showed myself that I was interested.”

It’s a lesson that harks back to her childhood, when as an overzealous Girl Scout Cookie seller, she found the boxes of cookies piled up in her bedroom and did what anyone with a sweet tooth might be tempted to do: she gave in and broke into the inventory.

After law school, Vallery went to France for a year to teach English, where she learned how to make macarons.

“When I moved to New York, I started to sell them on the weekends at markets,” she says. “And it’s tough to schlep all these things around Manhattan. I was 25, and at the time I didn’t have the business acumen. And I finally had a coveted job as a lawyer—I just wasn’t ready to go all the way out on a limb.”

Vallery believes in testing the waters before making a big change. For those contemplating one today, she recommends launching a simple webpage to put out feelers.

“About five years ago I got on Instagram, and I was able to quickly accumulate followers,” she explains. “When I started my account, I googled ‘how to get 1K followers,’ and it said to interact with people who like your posts and who are doing what you’re doing,” she says with a laugh.

“Within a year and a half, casting directors started reaching out to me,” Vallery says. “When a casting director for The Great American Baking Show reached out, I didn’t expect it to amount to anything, but it did.”

“I finally decided to quit my job because I felt like time was ticking by and I felt the window of opportunity was closing. I thought I was going to have a lot of opportunities,” she says, “but the show was canceled and they didn’t air the rest of my season.”

5. Know that opportunities can come from anywhere.

“I ended up meeting someone at an event who distributes grants to artists in New York City,” Vallery says. “I told them I was writing a cookbook to tell the story of overcoming adversity, and they were interested in supporting me.”

Now she is promoting her book, Life Is What You Bake It. It’s a collection of heirloom recipes drawn from her family’s Louisiana roots, published by Clarkson Potter in September.

“It’s a dream come true,” she says. “The reason I wanted this career was because this is my passion.”