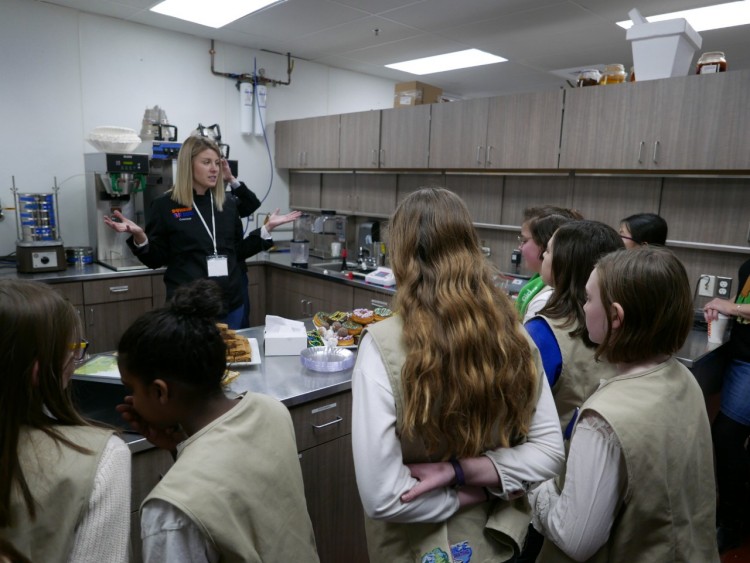 For java lovers everywhere, it’s hard to imagine a more fun job than spending every day coming up with new coffee flavors.

That’s exactly what Courtney Anderson, age 29, does as manager of global research and development at Dunkin’ Donuts’ headquarters in Canton, Massachusetts. For Courtney, working in food science is a dream come true, but it wasn’t her original career goal. In fact, when she first enrolled at the University of Massachusetts Amherst, she was pre-med.

“Then I worked at a hospital, and hated it,” she says. “Right afterwards, I took a food science elective and never looked back.”

Her confidence to pursue her ambitions developed at Girl Scouts, says Courtney, a Gold Award Girl Scout who grew up in Monson, Massachusetts.

“I remember so much about Girl Scouts—the trips to Washington, DC, the horseback riding camp—but a lot of my memories are about trying new things and the empowerment that comes with fundraising and then being able to decide how we were going to spend the money we raised.”

After a stint at Coca-Cola, where Courtney worked at one of the company’s bottling facilities, she spent three years at a consulting firm focusing on packaged goods, where she says she “learned everything from [how to market] snack foods to how to make high-protein nut milks years before they were a thing.” Courtney has spent the last five years working at Dunkin’.

A typical day includes meeting with marketing and restaurant operations teams about new products, approving new flavors, tasting coffee and frozen teas in the lab with her team, and testing the brand’s caramel sauce. She also works on partnerships with other brands, including Girl Scouts.

If you ask Courtney about the key to her career success, she’ll tell you that it’s the collaboration skills she learned as a Girl Scout that she uses at work every day.

“I’ve had a lot of different roles and, because of that, I’ve learned some of what it takes to do another person’s job. I may not understand everything, but I always try to make their job easier or find ways to make them feel like a hugely important part of the team,” she says.

Courtney works hard to make sure everyone, from the most junior person on the team to the most senior, feels valuable and respected.

“I may be at the top of the funnel when it comes to a new product that’s being developed, but nothing gets executed unless everyone else does their job.”