Commemorate the centennial of the 19th Amendment 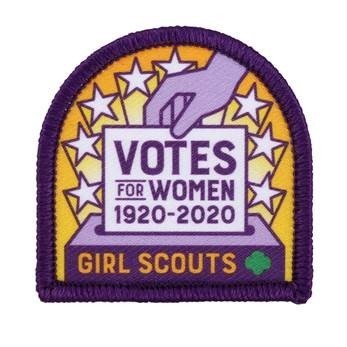 The 19th Amendment, which was ratified in 1920, removed the gender restriction to voting—a significant milestone for democracy! Before this groundbreaking amendment, women couldn’t vote in national elections. In some states, women were also banned from voting in local elections. However, even after the 19th Amendment, many states passed laws discriminating against women of color—laws that were not eliminated until the Voting Rights Act of 1965.

Today, in 2020, in some states voting laws and barriers remain in place that impede women, especially women of color, from participating in elections. And yet women continue to demand their right to vote in elections and are running for office in higher numbers than ever before.

The Girl Scout Suffrage Centennial patch gives you and your troop a chance to explore this important history through simple guides and fun activities.

Want to do a quick suffrage activity? Follow the link for your age level and get started!

If you want to earn your patch, here’s how to get started:

1. Download the Suffrage Centennial patch activity guide for your age level, and complete the Discover,        Connect, and Take Action activities.

The materials and activities in this toolkit will inspire girls to discover the history of women’s voting rights and civic engagement. Through these activities, girls will connect, have multigenerational conversations within their communities, better understand the gender barriers that have been broken, and celebrate the women who broke them.

Check out these fun art projects that take inspiration from what early suffragists did to call attention to their cause. Get creative and put your own twist on these entertaining activities.

Use your voice to speak out in support of the Women's History and Nineteenth Amendment Centennial Quarter Dollar Coin Program Act. It’s easy when you get started with this handy resource. Take action now!