NEW YORK, NY (March 27, 2017)—Girl Scouts of the USA (GSUSA) spotlights its legacy of girls' civic engagement by showcasing its Citizen badges at the 43rd annual Macy’s Flower Show. Revealed yesterday, the interactive garden display at Macy’s Herald Square illustrates how communities can flourish when people lend a hand, a nod to Girl Scouts’ longstanding commitment of encouraging girls to take the lead in their communities, the government, public policy, and the democratic process. The floral display symbolizes how communities bloom when everyone rolls up their sleeves and gets involved—like a Girl Scout.

The exhibit, on view through April 9 at Macy’s Herald Square’s recently renovated “One Below” floor, features a working spigot that visitors can pump to water a giant flower, allowing it to blossom, as well as levers that move to reveal the Citizen badges a Girl Scout earns when she engages in civic action. The badges (including Public Policy, Behind the Ballot, and Inside Government) foster vital skills for girls ages 7–18, such as how to take part in a civil debate, make group decisions, and get involved in government. Through unique Girl Scout programming, girls learn to stand up for what they believe in, identify issues they care about, and take the lead like a G.I.R.L. (Go-getter, Innovator, Risk-taker, Leader)™ to make the world a better place.

Girl Scouts continue to use these crucial skills in their adult lives: Girl Scout alumnae make up the majority of women in leadership positons in the current U.S. government, including 76 percent of women senators, 54 percent of women representatives, and four of the five women governors. According to the Girl Scout Research Institute report Girl Scouting Works: The Alumnae Impact Study (PDF), alumnae are also more civically engaged and likely to vote than their non–Girl Scout peers. And the longer women were Girl Scouts, the higher their level of civic participation.

“We are thrilled to return this year to the Macy’s Flower Show, and demonstrate our long-standing Girl Scout tradition of leading civic engagement,” said GSUSA interim CEO Sylvia Acevedo. “Our Citizen badges reflect the extraordinary Girl Scout programming designed to foster, in every girl, a strong sense of civic duty. This encompasses taking action towards a passion that addresses the greater good—from getting involved in government to advocating for change as a global citizen.”

A nonpartisan organization, Girl Scouts is committed to ensuring that girls have a voice and are empowered to use it to be actively involved in their communities. The organization was founded in 1912, when women in the United States did not even have the right to vote. When the U.S. Congress passed the 19th Amendment, granting women this right, Girl Scouts gathered outside polling places to support women as they cast their first ballots. Empowering girls to step up and forge their own life paths is at the center of everything Girl Scouts does.

Today, girls continue to advocate for equality, those less fortunate, and much more because of Girl Scouts. And countless civically engaged women who found their voice in Girl Scouts persistently take action in support of issues that matter to them—for instance, expanding access to high-quality education, championing efforts to protect the environment, and mobilizing grassroots efforts to improve communities.

Local councils Girls Scouts of Northern New Jersey, Girl Scouts of Central and Southern New Jersey, and Girl Scouts of the Jersey Shore also showed their support for the Macy’s Flower Show by participating in Family Fun Day on March 26. These Girl Scouts volunteered to read stories to children and led various hands-on activities throughout the day. To learn more about how Girl Scouts gives girls opportunities to create positive change in their communities, or to join, volunteer, or donate, visit www.girlscouts.org.

We're Girl Scouts of the USA
We're 2.7 million strong—1.9 million girls and 800,000 adults who believe girls can change the world. It began over 100 years ago with one woman, Girl Scouts' founder Juliette Gordon "Daisy" Low, who believed in the power of every girl. She organized the first Girl Scout troop on March 12, 1912, in Savannah, Georgia, and every year since, we've made her vision a reality, helping girls discover their strengths, passions, and talents. Today we continue the Girl Scout mission of building girls of courage, confidence, and character, who make the world a better place. We're the preeminent leadership development organization for girls. And with programs for girls from coast to coast and across the globe, Girl Scouts offers every girl a chance to do something amazing. To volunteer, reconnect, donate, or join, visit www.girlscouts.org. 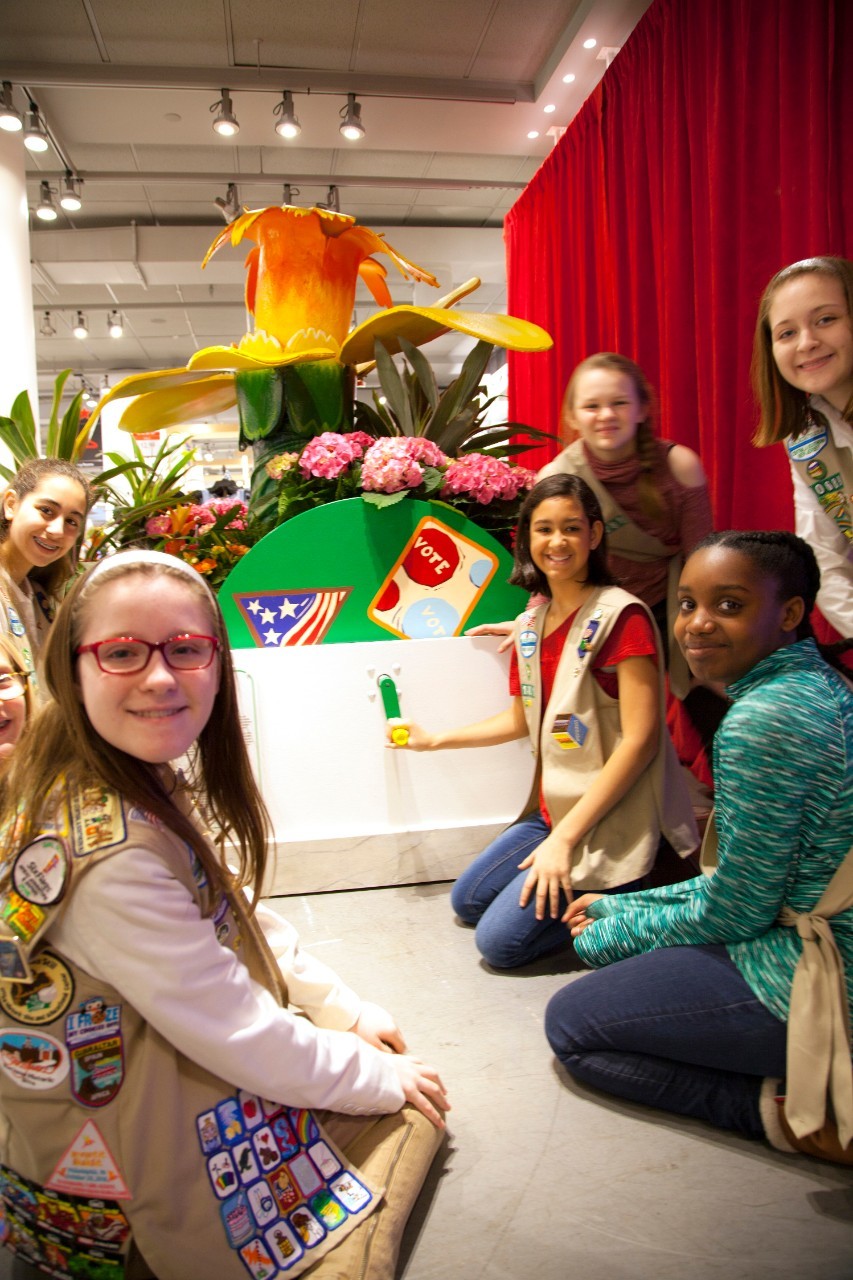 Girl Scouts of the USA spotlights its legacy of girls' civic engagement by showcasing its Citizen badges at the 43rd annual Macy’s Flower Show. To learn more about how Girl Scouts gives girls opportunities to create positive change in their communities, or to join, volunteer, or donate, visit www.girlscouts.org.