NEW YORK, NY (March 24, 2017)—Today, actress Mckenna Grace of Fox Searchlight Pictures’ new film Gifted joined the ranks of proud Girl Scouts after being officially pinned a Girl Scout Junior by Lise Luttgens, CEO of Girl Scouts Greater Los Angeles. The fifth-grader celebrated with her fellow Girl Scouts and friends by exchanging gifts and talking about the forthcoming movie; what did she like best about her character? Which co-star was funniest? And why are role models so important? Girl Scouts of the USA (GSUSA), Fox Searchlight Pictures, and cast members from Gifted are acknowledging some of the nation’s top role models—Girl Scout troop leaders and volunteers—with a heartfelt gift during April’s National Volunteer Month. As many as 16,200 volunteers in 54 markets across the country will receive up to two free tickets to a special screening of Gifted.

In addition to promoting the value of adult role models, Gifted addresses many principles at the core of Girl Scouting, such as the importance of developing girls’ soft skills to complement their academic knowledge. The organization’s unique programming encourages every girl to unleash their inner G.I.R.L. (Go-getter, Innovator, Risk-taker, Leader)™ and provides nearly 2 million girls with experiences that prepare them to cultivate grit, problem solve, take healthy risks, and lead with empathy—all skills not necessarily taught in school, but vital for 21st century leadership. And, at least 90 percent of parents say their daughter is more confident, has more friends, and is happier because she’s in Girl Scouts, according to results from a poll conducted with more than 3,500 volunteers and parents of Girl Scouts in the K−5 age range.

In Gifted, Mckenna Grace portrays Mary, a spirited child prodigy living in a coastal Florida town. Mary is raised by her uncle Frank Adler (Chris Evans), whose plans for a normal school life for Mary are foiled when the seven-year-old’s mathematical abilities come to the attention of his formidable mother Evelyn (Lindsay Duncan) whose plans for her granddaughter threaten to separate Frank and Mary. Octavia Spencer plays Roberta, Frank and Mary’s landlady and best friend. Jenny Slate is Mary’s teacher, Bonnie, a young woman whose concern for her student develops into a connection with her uncle as well. Gifted opens in limited theaters on April 7, and in theaters nationwide on April 21. For more information visit http://www.foxsearchlight.com/gifted/.

“It was fun to wear a Girl Scout uniform and play with the other girls on the set; I’m so excited to officially be a Girl Scout and have my own sash!” said Mckenna. “The organization empowers girls to become leaders and try new things. It also gives girls awesome role models. My character in Gifted learned a lot from the grownups in her life, so it’s important to me that other girls do, too. Role models can change girls’ lives!”

Girl Scout data show that girls aren’t the only ones who benefit from participating in Girl Scouts: 95 percent of Girl Scout volunteers are proud to make a positive difference in girls' lives.

Although volunteers are the backbone of the Girl Scout experience, and GSUSA boasts more than 800,000 of them, currently over 20,000 girls who want to join Girl Scouts are on waiting lists because communities don’t have enough local volunteers.

“At Girl Scouts, we understand the importance of recognizing our amazing volunteers―not just during National Volunteer Month, but throughout the year,” said GSUSA interim CEO Sylvia Acevedo. “Volunteers serve selflessly on the front lines of our organization, undertaking the ever-important work of teaching girls essential life skills through experiences in Girl Scouts—skills that will chart their course for success for a lifetime.”

We're Girl Scouts of the USA
We're 2.7 million strong—1.9 million girls and 800,000 adults who believe girls can change the world. It began over 100 years ago with one woman, Girl Scouts' founder Juliette Gordon "Daisy" Low, who believed in the power of every girl. She organized the first Girl Scout troop on March 12, 1912, in Savannah, Georgia, and every year since, we've made her vision a reality, helping girls discover their strengths, passions, and talents. Today we continue the Girl Scout mission of building girls of courage, confidence, and character, who make the world a better place. We're the preeminent leadership development organization for girls. And with programs for girls from coast to coast and across the globe, Girl Scouts offers every girl a chance to do something amazing. To volunteer, reconnect, donate, or join, visit www.girlscouts.org. 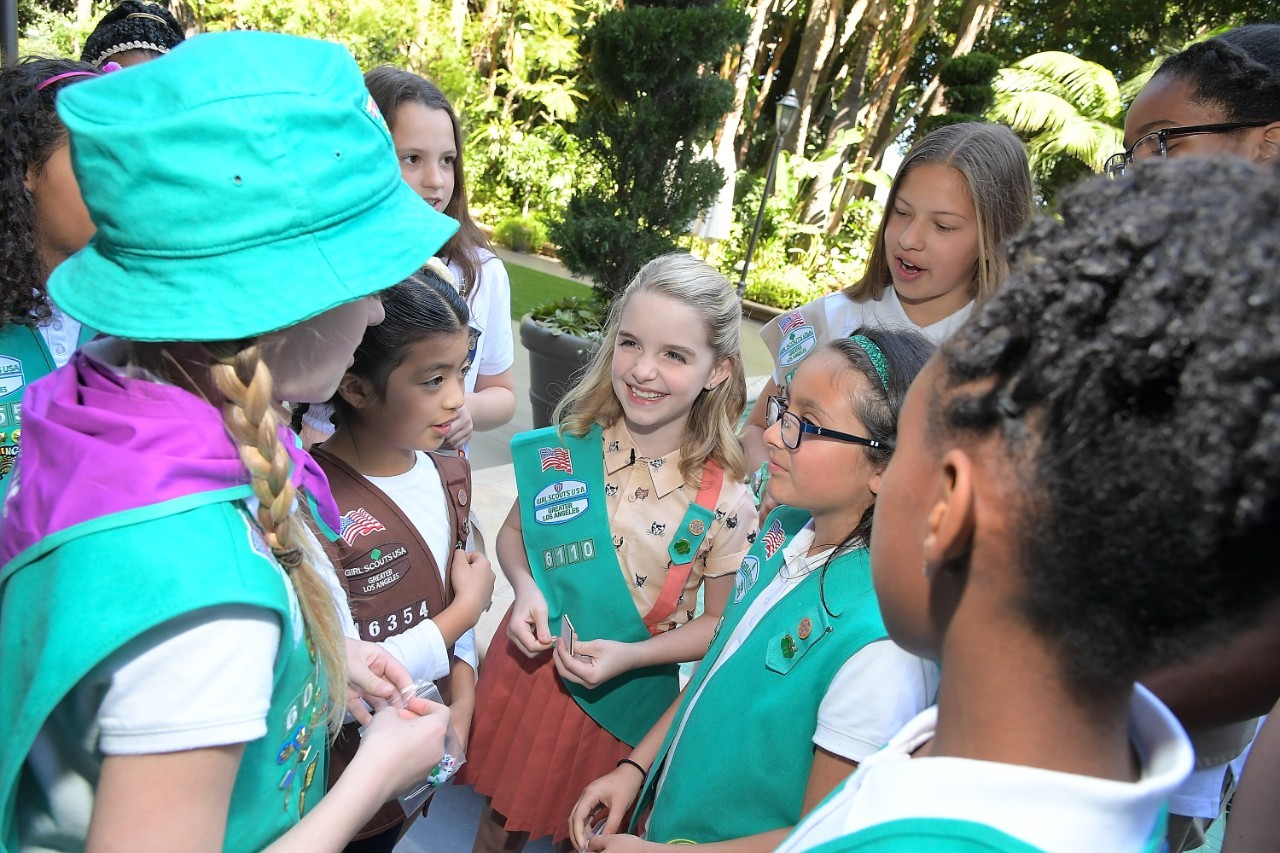 Gifted star Mckenna Grace gushed “I’ve always wanted to be a Girl Scout,” during a ceremony today where she joined the organization. During the celebration with girls from Girl Scouts Greater Los Angeles she promised to make the world a better place and be a sister to every Girl Scout. To join, volunteer, or donate, visit www.girlscouts.org.

View more photos from the ceremony.