In 1912, Juliette Gordon Low (1860–1927) founded Girl Scouts of the USA, an organization that today serves millions of girl members and alumnae, and reflects the arc of her remarkable life.

An ardent believer in the potential of all girls and the importance of fostering their individual growth, character, and self-sufficiency, Juliette is credited with establishing and nurturing a global movement that has changed the world.

Early Life
Born Juliette Magill Kinzie Gordon on October 31, 1860, in Savannah, Georgia, “Daisy,” as she was affectionately known, descended from a long line of strong and independent women. Her home, often referred to simply as the Birthplace, was designated a registered National Historic Landmark in 1965.

Juliette was a sensitive, curious, and adventurous girl known for her sense of humor, compassion, and concern for others. She was interested in athletics, the arts, animals, and nature—attributes that would one day become central to the Girl Scout Movement.

As a child and young adult, she experienced several ear injuries resulting in almost total hearing loss that affected her for the remainder of her life.

She married William Mackay Low in 1886, and together they set up homes in both England and Georgia. Juliette returned often to the United States to connect with her many friends and family members—and also to find support during what ultimately proved to be a calamitous marriage that ended shortly before her husband’s death in 1905.

Birth of a Movement
A meeting in 1912 with Sir Robert Baden-Powell, the founder of Boy Scouts, inspired Juliette to establish Girl Scouts that same year. Telephoning a cousin from her home, she announced, "I've got something for the girls of Savannah, and all of America, and all the world, and we're going to start it tonight!"

From that first gathering of a small troop of 18 culturally and ethnically diverse girls, Juliette broke the conventions of the time—reaching across class, cultural, and ethnic boundaries to ensure all girls, including those with so-called disabilities, had a place to grow and develop their leadership skills.

Using her innate talent for fundraising and public relations, combined with her vast network of friends and supporters, she led Girl Scouts with passion and determination—ensuring it was, and always would be, an experience that was “girl led.”

Juliette Gordon Low died January 17, 1927, at her home in Savannah, Georgia, after a long and private struggle with breast cancer.

An Enduring Legacy
After her death, her friends honored her by establishing the Juliette Low World Friendship Fund, which finances international projects for Girl Scouts and Girl Guides around the world.

She is remembered nearly 100 years after her passing with camps, schools, and scholarships established in her honor. Other tributes include a postage stamp, numerous biographies, and even an opera about her life and achievements. She was posthumously awarded the Presidential Medal of Freedom by President Barack Obama in 2012.

Today, the vision of Juliette Gordon Low lives on in Girl Scouts across the nation and the globe who carry on her legacy. She is remembered and honored by generations of people whose lives have been touched by Girl Scouts, the premier leadership development organization for girls around the world.


Want to get involved with Girl Scouts?
Join | Volunteer | Donate 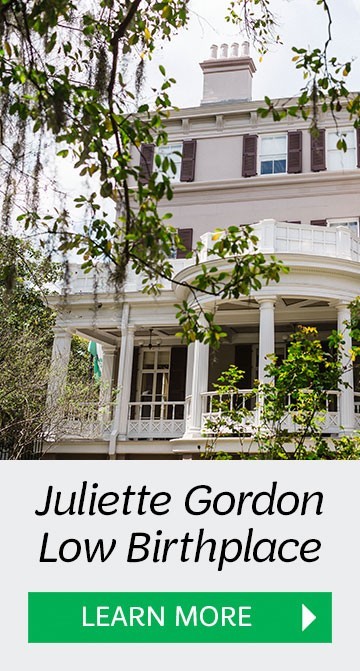