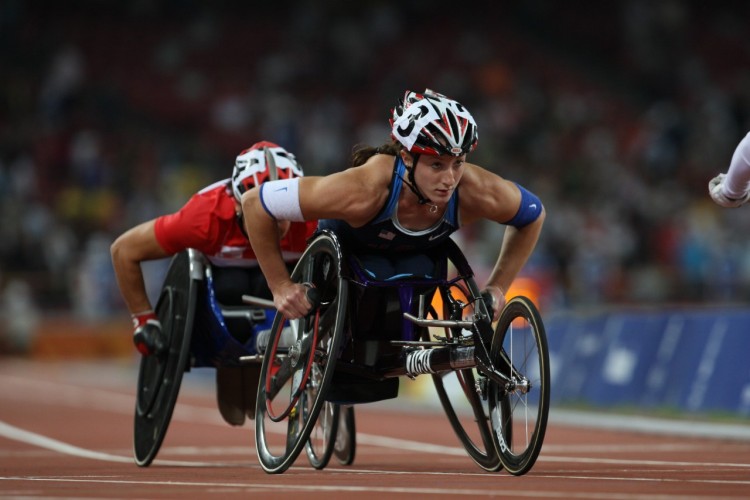 Tatyana McFadden was born in Russia with spina bifida and, at the beginning, her future was uncertain.

“I spent the first six years of my life in an orphanage in St. Petersburg, Russia, because my birth mom was not able to give me the care that I needed,” she says. But Deborah McFadden, then commissioner of disabilities for the U.S. Department of Health and Human Services, met her while touring the orphanage on a business trip. The two felt an immediate connection, and before long, Tatyana was living with her new adoptive family in Ellicott City, Maryland.

“A lot of firsts happened—doctor’s visits, school, playing sports. And I was enrolled in Girl Scouts, too,” says Tatyana, now 31. “In the summer, my family thought it would be good for me to go to camp and so they sent me to a Girl Scout camp when I was 10.

“It was an amazing experience for everyone,” she recalls of her time at Camp Potomac Woods in Leesburg, Virginia, a 101-acre camp just an hour from Washington and part of the Girl Scouts of the Nation’s Capital.

“I was the only girl with a disability at camp that session. They had recently upgraded the camp facilities, so they were fully accessible, which was perfect for me. The hiking and the activities in the woods became like a team bonding experience where we came together. No one was excluded. And, while I had a disability, I was one of the best swimmers in camp! It was a wonderful opportunity for able-bodied campers to learn that people with disabilities can do anything.”

Tatyana comes from a Girl Scout family—her mother was the top cookie seller in Ohio when she was a girl and her sisters are Gold Award Girl Scouts. Tatyana herself, now a lifetime member, continued in Girl Scouts until eighth grade, when she tried out for the Summer 2004 Paralympic team in Athens, Greece—and made it. From then on, it was clear that training needed to be her priority. Her hard work paid off, as she went to the 2008 Paralympic Games in Beijing, the 2012 Games in London, the 2016 Games in Rio. The upcoming 2020 Paralympic Games in Tokyo will be her fifth.

Tatyana graduated from the University of Illinois, which she originally attended on a wheelchair basketball scholarship. She completed her master’s degree in education there in May and continues to train at the school. When she concludes her racing career, she plans to pursue work as a child life specialist.

A passionate advocate for others, she recently launched the Tatyana McFadden Foundation, which supports youth with disabilities, providing racing chairs so they can compete. In the months ahead, she will focus on preparations for the Tokyo Paralympics, where she plans to compete in six events.

“The New York marathon is one of the toughest—you go through all the boroughs and all the bridges, lots of twists and turns,” she says. “I was thrilled to win the NYC Marathon on my fourth try.” This year, she raced again and came in second.

“I love wheelchair racing, talking about disabilities, and pushing for equality for wheelchair racing,” she explains. “We still have quite a way to go for equality. In the beginning our press conferences were separate (able-bodied racers and those with disabilities), and now they’re together. Slowly the prize money is increasing, as people learn about our sport and the field grows.

“It’s always OK to embrace your differences,” Tatyana observes. “I have always been different, it’s obvious, you can see it. But you can do anything you set your mind to if you surround yourself with really positive people.”