Troop 20269 from Girl Scouts of the Southern Appalachians is a perfect example of how big, meaningful impact often starts with just one idea and a whole lot of enthusiasm. Through social media, the girls and their troop leaders learned of Libby Beidelschies, who works at the University of Tennessee’s Pediatric Language Clinic (PLC). Libby, a clinical instructor, had seen an interesting sensory tool at The Muse Knoxville, a science, technology, engineering, and math (STEM)–based children’s museum, and hoped someone in her network could build a similar tool for her patients. That’s when these enterprising Girl Scouts stepped up to the challenge!

First the girls scheduled a meeting to visit the PLC in Knoxville, meet some of the patients (mostly children between two and three years old with a diagnosis of or identified markers of autism), see other sensory tools the clinic uses, and sit down to talk with Libby about her specific needs. 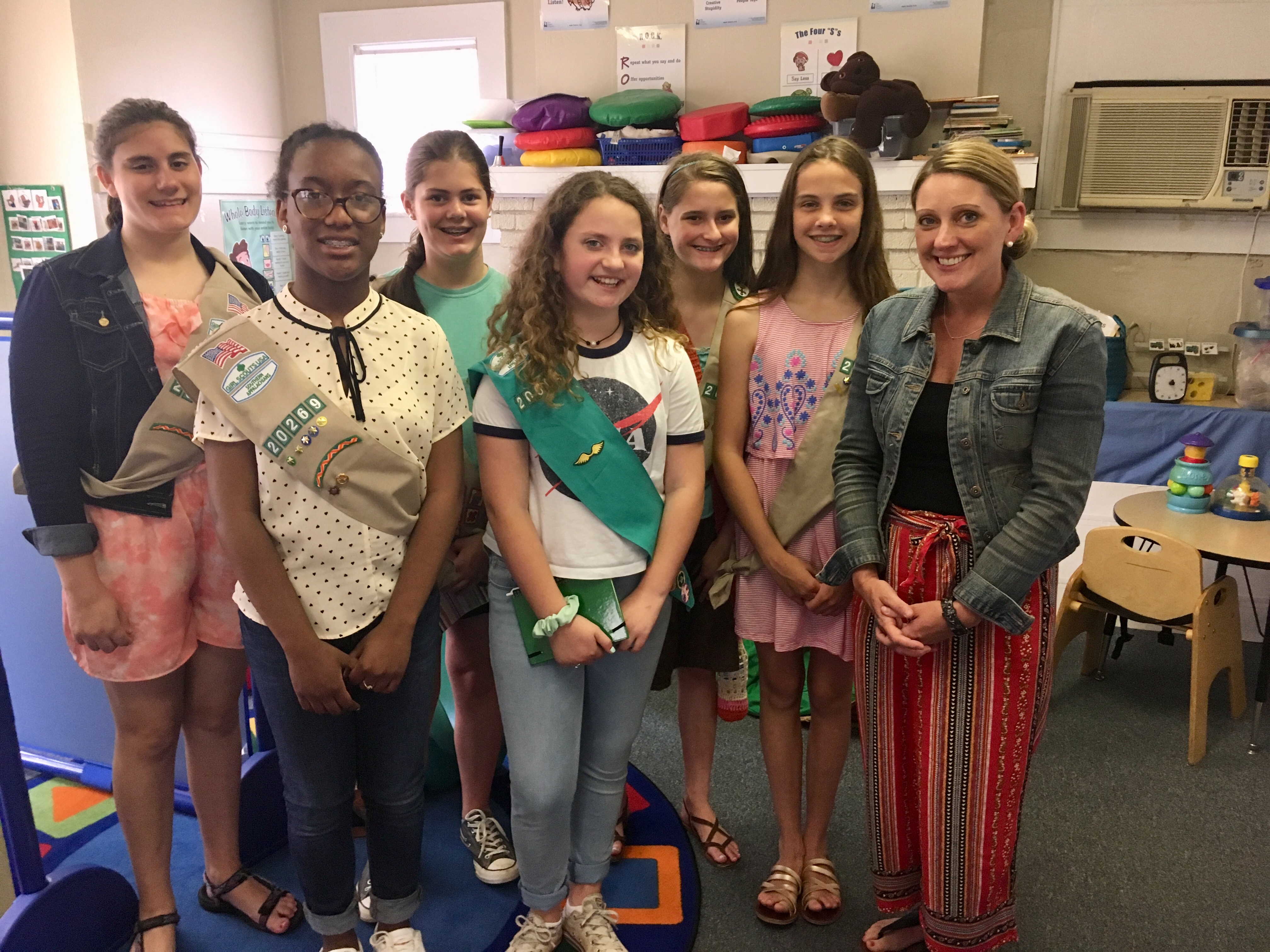 Next the troop headed off to The Muse to observe The Zipper installation. The girls studied it to figure out how it was constructed, which materials they would need to replicate it, and how they could make both a smaller scale model for younger children and one that was more mobile so it could be built at home and later transported to the PLC.

Then the girls got to work. They researched, budgeted, sketched, and developed a timeline for their project. Later, with a firm game plan in hand, they headed to the hardware store with their hard-earned Girl Scout Cookie money to get started. All in all, the girls logged an impressive 56 hours of construction time—talk about dedication! And despite their busy summer schedules, every girl in the troop contributed to getting The Zipper installation built, delivered, and installed. Team work always makes the dream work! 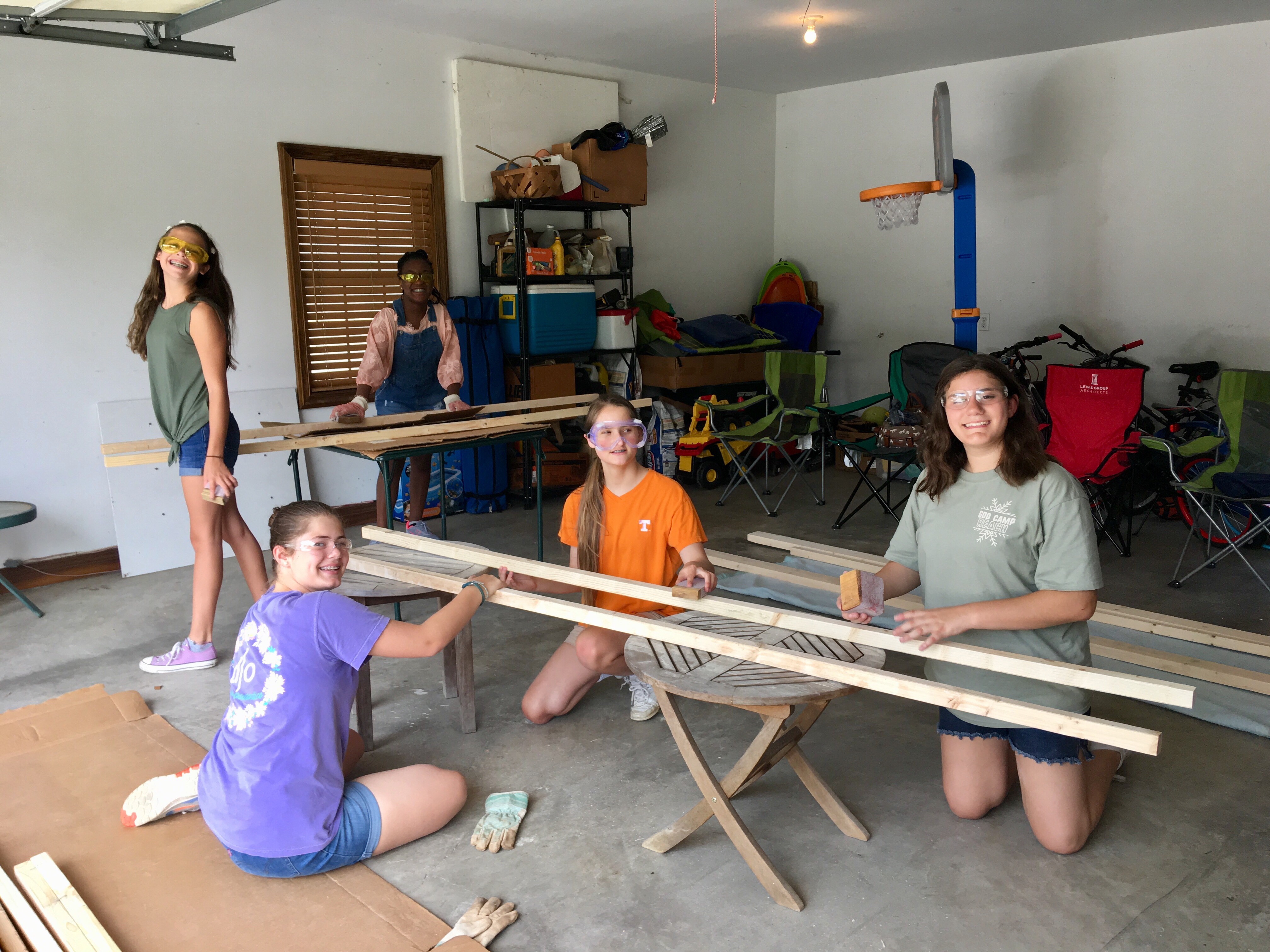 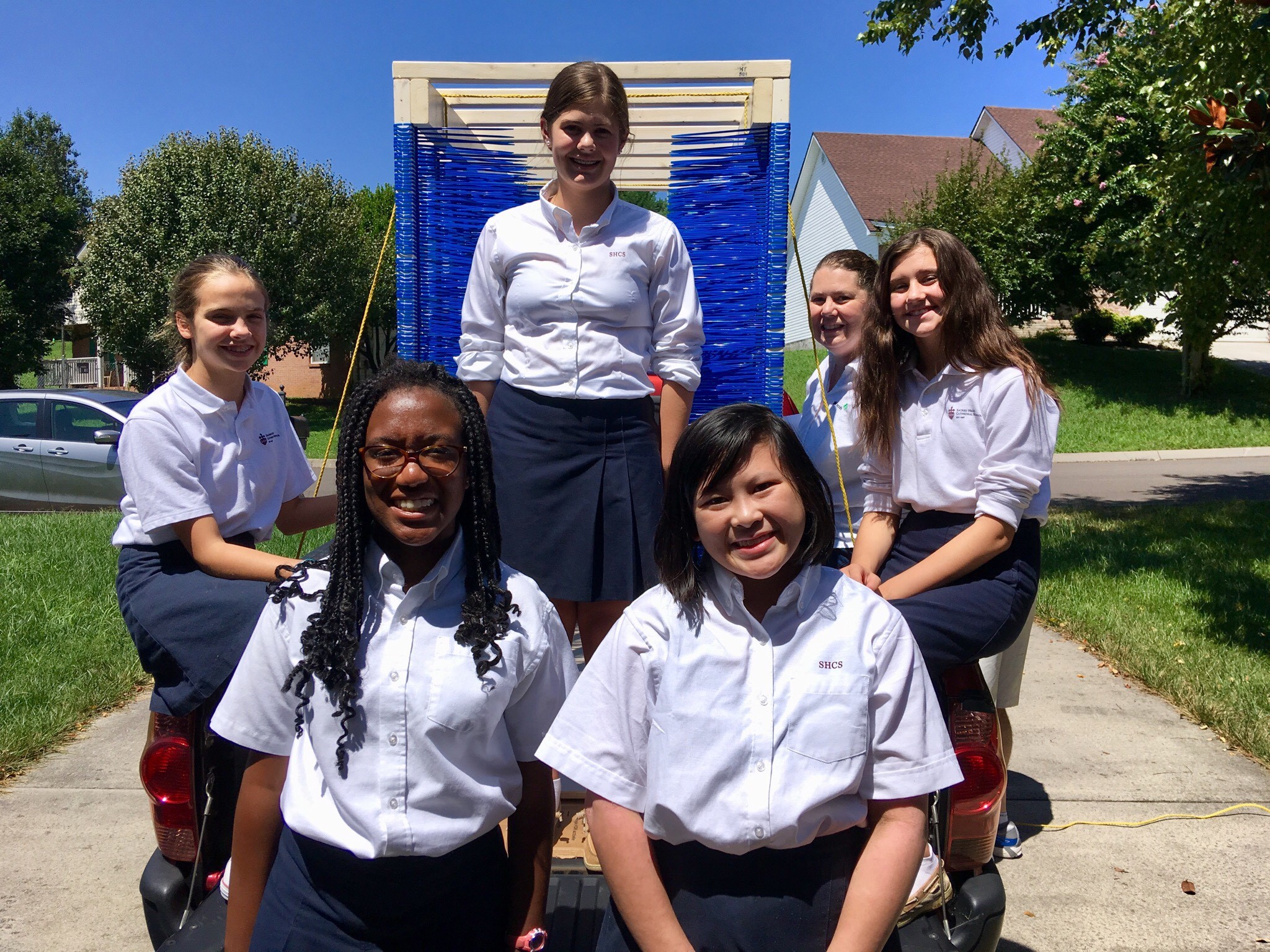 Both the staff and the patients at the PLC were thrilled to see The Zipper and use it for the first time. The staff made sure to send the girls lots of pictures and videos of patients enjoying the creation (and continue to do so).

“It was so much fun being able to collaborate with the girls on this project,” Libby said. “Initially, I feel like it was all about the physical structure, but once the girls were able to come to the clinic, see our setting, and learn about our clients, it became much more about the kids we serve rather than just the structure itself.”

“Initially, I feel like it was all about the physical structure, but once the girls were able to come to the clinic, see our setting, and learn about our clients, it became much more about the kids we serve rather than just the structure itself," said Libby, clinical instuctor at the PLC.

Libby says that the response to The Zipper has been overwhelmingly positive and that the project opened up an important dialogue about how her patients are the “same but different” than their peers and how sensory processing and other issues related to autism work. By completing this project, the girls were able to build awareness of and sensitivity to others with a range of disabilities, Libby explains. And the best part? Every single one of her patients has gravitated toward The Zipper and enjoyed it. 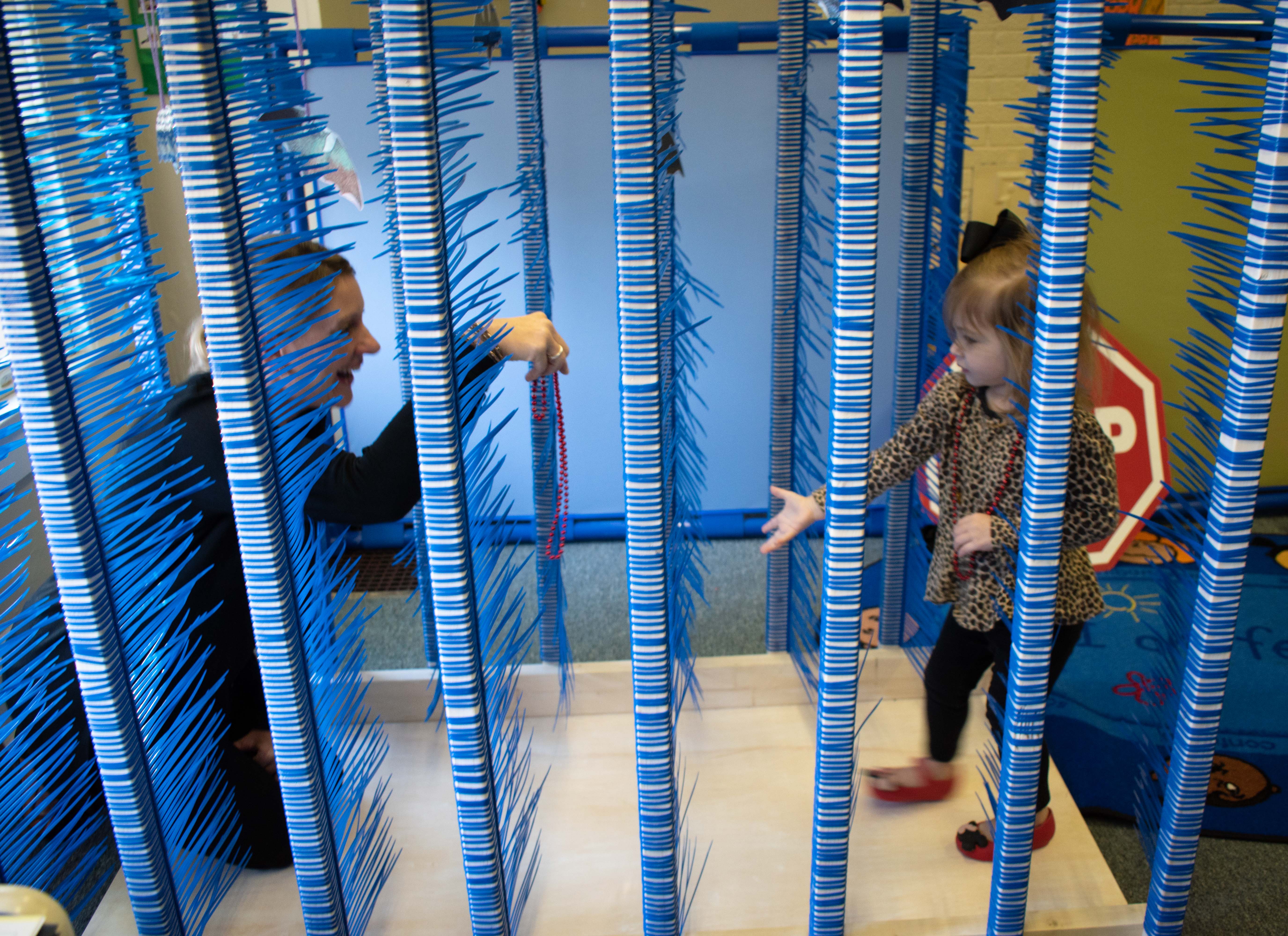 “The Zipper has provided our clinicians with more opportunities to set up social games and interactions in the context of a fun sensory activity,” Libby said. “Children who have traditionally had difficulty in areas of joint attention and engagement are able to participate in reciprocal interactions and social games while playing in The Zipper.”

The girls’ troop leader, Jennifer Spezia, is proud of everything they accomplished through the project and through the Girl Scout Cookie Program in general.

“They aren't just cookies,” she says. “They’re teaching tools for our girls to learn business skills, interpersonal communication, organization, marketing, finance, and service. Our girls dream big, and they produce big. When you empower girls and let them lead, they soar!”

"Our girls dream big, and they produce big. When you empower girls and let them lead, they soar!” says troop leader Jennifer.

Another volunteer, Christina, who works closely with the group, said she’s truly impressed by the girls’ ability to break down such a huge task into little parts, draft a plan, and get it done. “It teaches them that no task is impossible, and they can do anything,” she said. “The girls weren’t afraid to get their hands dirty with all of the tools either, and it was really awesome to watch.”

“It’s also been incredible to see how the initial use of The Zipper has expanded,” Christina added. “University student interns have found new ways to interact with patients through The Zipper and have been so inspired by it. It gives these kids a sense of control in how they interact with their environment, and that’s a big deal.”

"It [The Zipper] gives these kids a sense of control in how they interact with their environment, and that’s a big deal," adds Christina, a troop volunteer.

Girl Scout Dee-Dee agrees that the project was as challenging as it was exciting. “The Zipper project was a lot of hard work,” she said. “At the same time, it was a lot of fun and a great experience. The best part was knowing we were able to make a lot of children happy! I can’t wait to do more projects like this.”

"The best part was knowing we were able to make a lot of children happy! I can’t wait to do more projects like this," Girl Scout Dee-Dee shared.

Celestina, another Girl Scout in the troop, says The Zipper project made her feel like she can make a difference in others’ lives even though she’s only in middle school. “This project showed us that big things can happen if you have a step-by-step plan,” she said.

For Girl Scout Molly, knowing that The Zipper was going to make children happy was an encouraging factor in getting the work done. Because that’s what Girl Scouts do—thrive on making things better for everyone!

All of the girls, now 12 and 13 years old and in their last year as Cadettes, have big plans for the future. After nine years in Girl Scouts, they plan to continue to participate in the Girl Scout Cookie Program to power amazing experiences for themselves and meaningful service projects for their communities. And guess what? Every single one plans to pursue her Girl Scout Gold Award when she becomes a Girl Scout Senior!

We can’t wait to see what these girls do next. Thank you, Troop 20269, for being a powerful force in your communities and bringing The Zipper to the PLC!