Taylor Stands Up to Bullying, Uses Her Voice to Heal and Help Others | Girl Scouts
Skip to content

Taylor Stands Up to Bullying, Uses Her Voice to Heal and Help Others

Taylor, currently a first-year Cadette in Troop 405 from Girl Scouts Heart of Central California, might only be 11 years old, but you’d never think she was so young after speaking to her and hearing her bullying story. Her G.I.R.L. (Go-getter, Innovator, Risk-taker, Leader)™ spirit shines so fiercely and bright! After experiencing bullying from third grade through fifth, she turned her struggle into triumph by speaking out, standing up for herself, and sharing her story to help others. And in true Girl Scout style, she’s now thriving and loving life—way to go, Taylor!

Taylor’s struggles with bullying started at her elementary school when a girl made fun of her appearance and the fact that she hung out with boys. Then more girls at school joined in and began poking fun at Taylor’s skin and hair color (Taylor loves to express herself by dyeing her hair different colors—you do you, G.I.R.L.!). Soon things began to escalate and even turned physical.

Taylor recalls being pushed into fences, punched, bitten, and locked in bathroom stalls. Girls would also take and destroy her belongings. At one point she even began faking being sick just to avoid going to school—not because she didn’t want to learn, but because she didn’t want to face more abuse at the hands of her bullies. And at the time, because there were no adult witnesses, the school was struggling to nip the issue in the bud. It wasn’t until she was bitten and had the marks on her back to prove it that the school was able to do something about it. Even the superintendent got involved.

“We have a big family, and we cried a lot together, trying to figure out the next step,” Taylor’s mother, Tina, explained. “But once Taylor started the sixth grade, her school was very aware of the situation, so the teachers came together to stay on top of it, and Taylor was also just done being pushed around. She was ready to fight back with her voice. And she stuck it out. She overcame it.”

"Taylor was also just done being pushed around. She was ready to fight back with her voice. And she stuck it out. She overcame it."

After the school had taken action against the bullies, Taylor and her parents still considered transferring to a different school. But ultimately they decided not to run away from the problem but face it head on, with the spark and determination they all knew Taylor had in her. And after her original Girl Scout troop disbanded, Taylor found a new group that welcomed her with open arms and, according to Tina, turned her into a different, very happy child.

“Once she found this new troop, it was amazing. These girls just opened their arms to Taylor and immediately treated her like a sister,” Tina said. “Her grades increased because she felt confident in herself. She is definitely a different kid now that she found the power in her with the help of these girls who said, ‘We love you. You’re good enough. You’re part of our team.’ She’s no longer afraid to be herself. She feels safe and accepted and has found a place where she can be happy and make a difference in the lives of others. She went from being a shy little girl who was bullied to a confident young woman who can speak in front of hundreds of people.”

"She is definitely a different kid now that she found the power in her with the help of these girls who said, ‘We love you. You’re good enough. You’re part of our team.’"

Now equipped with the confidence and a fearless attitude, as well as the help of her Girl Scout council, Taylor shares her bullying story with girls in her community in the hopes that she can help them deal with similar situations while she also continues to heal herself. She’s spoken to younger troops in the area and even shared her story on how she was able to stand up to bullying at several events, including her council’s annual meeting in Sacramento. 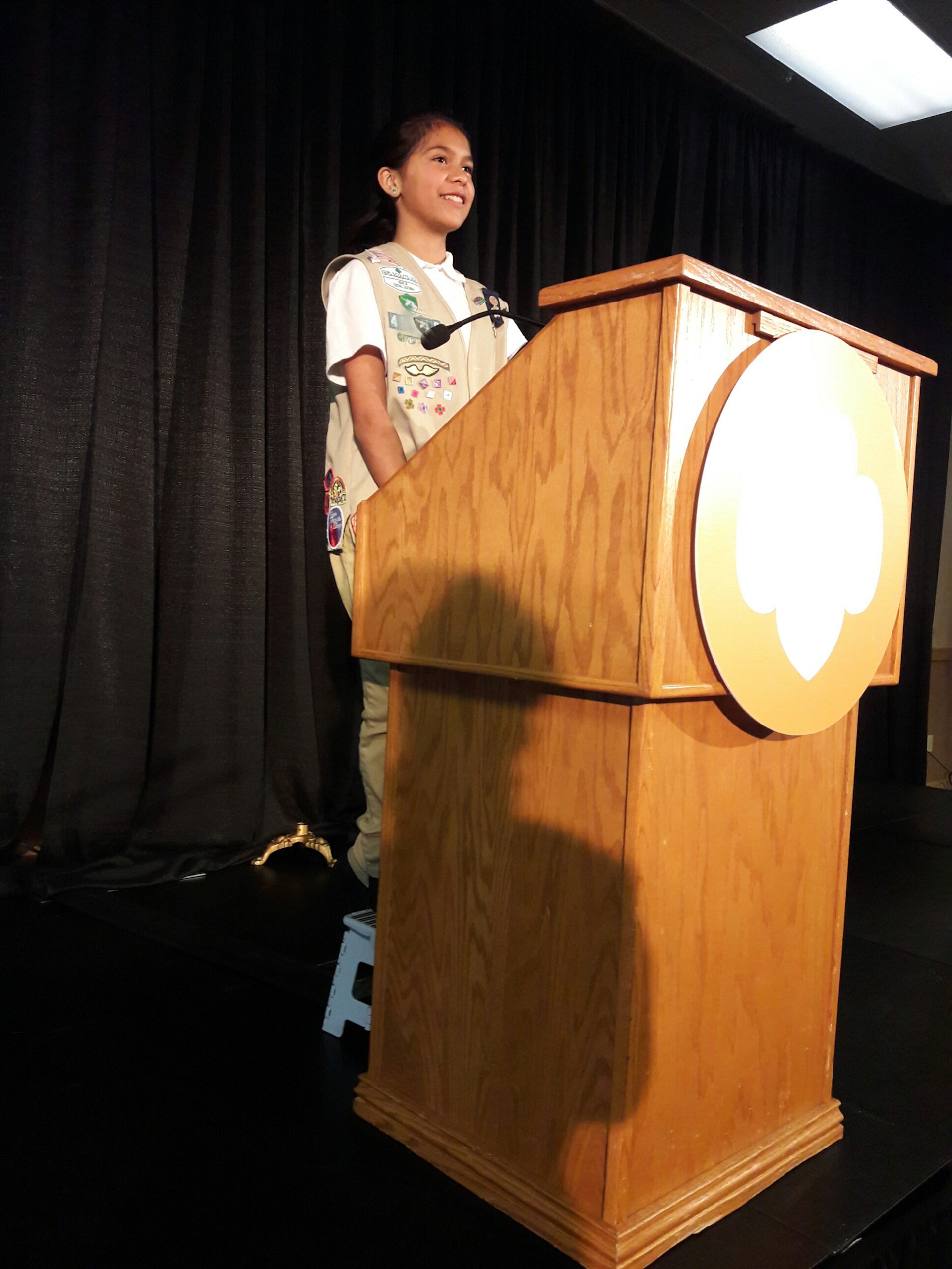 Taylor speaks about bullying and how Girl Scouts inspired her to be brave during Girl Scouts Heart of Central California's annual meeting in Sacramento.

Filled with emotion after her speech, Taylor gets to meet Girl Scouts Heart of Central California CEO Linda Farley at annual meeting in Sacramento.

“Talking to different people about my story has helped me take my mind off of the negative part of what happened to me,” Taylor explains. “I think sharing my story can help other kids who are going through the same thing by giving them the courage to go talk to people who can help them solve the problem and stop the bullying.”

Taylor emphasizes that it’s also important to “see something, say something” when those who aren’t directly being bullied witness it happening to someone else. Because even if it doesn’t involve the bystander, being aware of it and allowing it to continue happening makes them part of the problem.

Taylor and her bullies still attend the same school and even have some of the same classes. Although Taylor says it’s a little awkward, she says she’s no longer afraid, because Girl Scouts taught her that she can overcome anything.

“Girl Scouts made me very courageous because they believed in me and let me stand up and speak out,” Taylor said. “They gave me the strength to go around and talk to younger kids about my struggles. My new troop always says, ‘Don’t let fear strike you out,’ and that makes me feel like I can face problems and find a way to fix them.” If young kids feel empowered to speak up like she has, Taylor believes they can help stop bullying by attacking the problem early on instead of letting it grow into something bigger and longer-lasting.

"Girl Scouts made me very courageous because they believed in me and let me stand up and speak out."

When she’s not sharing her bullying story, Taylor loves doing community service, like painting fire hydrants and planting trees for Make a Difference Day (one of the largest annual single days of service nationwide). She also loves going to Girl Scout camp and being part of the close-knit, supportive group of friends Girl Scouts provides.

We’re proud of you, Taylor! And we’re so glad you were able to find your voice; rely on the support of your Girl Scout community; and turn your lemons into sweet, victorious lemonade! Watch out, world—there’s nothing this G.I.R.L. can’t conquer, and she is going to shake things up.

How five brave risk-takers helped pass a smoking ordinance in their town.

Could Your Girl Be the School Bully?

Your idea of a school bully may not be your sweet daughter. But what if it is?

Learn how one troop finds their brightest shine outside.