Five bold Girl Scouts—Makenna, Amelia, Julianna, Micaela, and Sofia—demonstrated the power and voices of a 100-woman army. How? This small but mighty group took on a complex and meaningful challenge to earn their Girl Scout Silver Award. As part of Troop 60789 from Girl Scouts of Colorado, the girls worked closely with their longtime troop leader Kristen Batcho and other community mentors for almost a year to champion and pass an ordinance that made smoking (whether tobacco, marijuana, or vaping) in a vehicle while a minor is present subject to community service or a fine. The ban, passed by the Aurora City Council, is the first of its kind in Colorado and an incredible accomplishment for these determined change-makers who are just 13 and 14 years old. 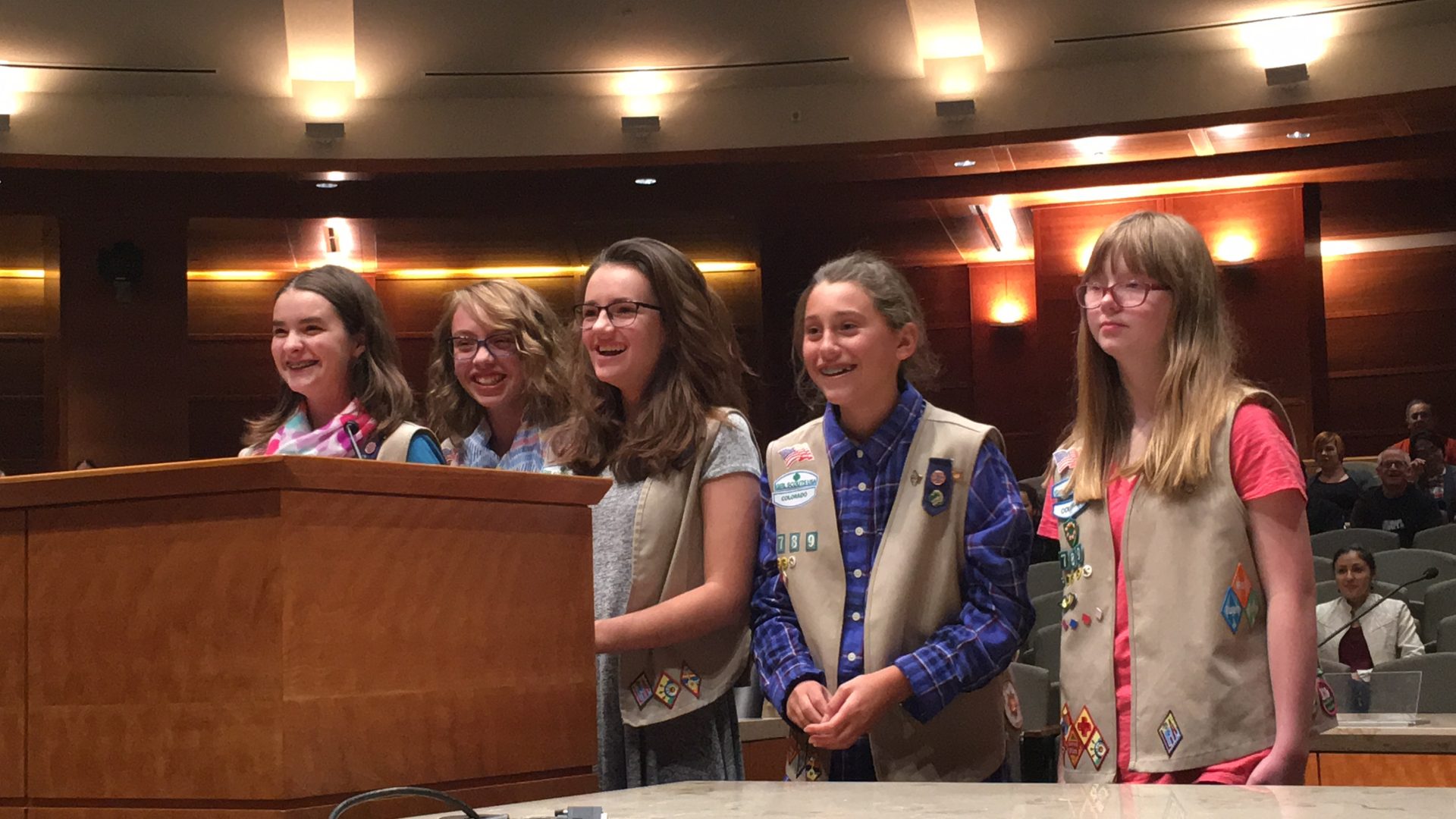 Before starting their Silver Award project, the girls completed the Breathe Journey, part of the Girl Scout Leadership Experience, focusing on how the environment, air, and noise pollution all affect people. After completing the Journey, the girls discussed what they would do with all of the new information they had just learned and then brainstormed how they could apply it to their Silver Award project. During these discussions, they kept coming back to the topic of smoking, mainly the many different ways that it harms adults and children—smokers and nonsmokers alike. The girls researched the topic further and decided to try to ban smoking in cars with minors to minimize the effects of secondhand smoke and to protect young people’s health.

“We chose this project because people smoking in cars might not only get lung cancer themselves, they could also be making their kids sick,” Sophia, age 14, added. “The kids breathe in the smoke and are affected too.”

To begin creating this important change in their community, Kristen and the girls reached out to Aurora City Council member Charlie Richardson for guidance. He was 100 percent on board! Charlie attended one of the troop’s meetings and educated the girls on the ordinance process. He then connected them to city attorney Nancy Rogers, who helped them write the actual ordinance in the most effective way possible. Nancy also came to a troop meeting and engaged in a lively discussion with the girls during which they asked questions and talked through how they wanted the ordinance to proceed.

Initially the girls wanted to make smoking in a vehicle with minors a primary offense. In other words, a police officer could pull someone over for that without any other reason. But when the original ordinance came back with an amendment to make it a secondary offense, meaning a person would have to be pulled over for another offense first before they could be punished for smoking in a car with a minor, the girls realized they had a better chance of getting the legislation passed if they accepted the amendment, so they did. (The ordinance would eventually pass with a 6-5 vote!)

When it came time for the ordinance to be discussed in detail at a city council meeting, the girls asked several speakers to testify on their behalf, including representatives from the American Lung Association, the American Cancer Society, UCHealth, and National Jewish Health.

Kathleen Moreira, the representative from UCHealth and a tobacco treatment specialist and smoking cessation expert, gave what Kristen calls “quite a compelling testimony” on secondhand smoke and the effects it has kids, especially as they’re still growing. Because Kathleen is a former smoker, the child of a parent who smoked in the car often, a mom, and a proud Girl Scout alum, UCHealth felt she would be the perfect person to represent the hospital and support the girls in their pursuit. 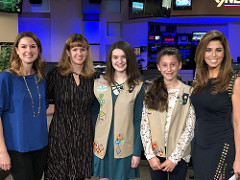 Kathleen Moreira, Kristen Batcho, and Girl Scouts Makenna and Julianna smile for the camera after being interviewed by 9News morning anchor Cory Rose about the girls' Silver Award project. 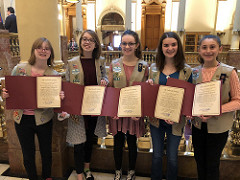 Sophia, Amelia, Micaela, Makena, and Julianna are recognized by Senator Rhoda Fields at the State Capitol for their efforts and work passing the smoking ordinance.

“I was overwhelmed with this powerful message that [the girls] were trying to send and that they were able to advocate for,” Kathleen said. “These girls made health history at 13 and 14 years old, and although I loved being a Girl Scout, I never did anything this important. Interacting with these girls reminded me that the power of girls is alive and well. What the girls are able to do now, utilizing outreach and being able to get so involved in civic matters, there is just a strength and a presence to Girl Scouts now that I think has really evolved over time.”

"These girls made health history at 13 and 14 years old."

Kathleen explained how she urged council members to use this opportunity to educate parents to make a different choice. “Maybe it’s not about asking parents to quit smoking,” she suggested, “but once they know that doing so in the car with children is really harmful, then they have the information to say, ‘OK, maybe I won’t quit, but I won’t smoke in the car.’ Most of us, when we know better, we do better.”

And it’s not just secondhand smoke that Kathleen is worried about. Thirdhand smoke is also dangerous, especially for babies and toddlers. What is thirdhand smoke? It originates from the particles of a burning cigarette that are left on surfaces, for example, the chemicals and nicotine that stay behind on doors, windows, and everywhere else in a vehicle when someone smokes inside it. This means that even when children aren’t in a car at the time someone is smoking, they can still ingest all those chemicals later on as they touch different parts of the vehicle.

Kathleen revealed that when children are chronically exposed to nicotine and smoke, their chances of becoming a smoker greatly increase. By passing the ordinance, the girls and city council members are helping prevent 2,200 kids in Colorado from becoming daily smokers, she further explained.

To every young girl who wants to make a change in the world but isn’t sure she’s capable of doing so, Kathleen says, “There is power in numbers, and an organization like Girl Scouts can really boost [girls’] confidence in their ability to make change, get things done, and stay motivated through the obstacles. I have a four-year-old daughter, and I can’t wait for her to start as a Girl Scout Daisy. I was so proud to show her that I was working with Girl Scouts and what they were able to do.”

“There is power in numbers, and an organization like Girl Scouts can really boost [girls’] confidence in their ability to make change, get things done, and stay motivated through the obstacles."

Even with all of the support the girls were able to garner, they also encountered some negativity and opposition. After their first meeting with the city council, a few not-so-nice comments cropped up on social media and in the form of other complaints. Because of this, Kristen and her co-leader, Michele Malchow, were concerned about having the girls attend the final council meeting in which a final vote for or against the ordinance would be made.

“We had been trying to keep the experience positive for the girls,” Kristen said. “But when we talked to them about it, they said, ‘This is part of life, and we have to deal with it.’” Kristen was impressed with the girls’ maturity and courage and decided to let them attend the meeting; they would leave only if things got too heated.

“What I have learned throughout this process is that everyone has an opinion on everything and not everyone will agree with what you’re trying to achieve, but that’s OK,” Makenna said.

“I have seen [the girls] blossom so much throughout this entire process,” Kristen praised. “Here are these young women who are changing the world and doing big things for the community. They’ve asked such good and insightful questions. They’ve embraced the project wholeheartedly, remained focused, and they’ve been willing to listen to feedback and be flexible. They’ve also just been so gracious and grateful with all of the adults and mentors who have helped them along the way. I am so proud of the young women they are becoming.”

Through this process, both the girls and their troop leaders discovered just how much girls can accomplish when they put their minds to it. “This is what Girl Scouts is all about,” beamed Kristen. “The idea of being girl-led, promoting the G.I.R.L. Agenda, and embodying all of the different facets of being a G.I.R.L. I don’t think my girls had truly realized their power until they were able to get this ordinance passed and make history.”

“This is what Girl Scouts is all about. The idea of being girl-led, promoting the G.I.R.L. Agenda, and embodying all of the different facets of being a G.I.R.L."

Can you imagine what Troop 60789 will be able to accomplish in the years to come? Congratulations, girls, on a job extraordinarily done!

Are you a G.I.R.L. (Go-getter, Innovator, Risk-taker, Leader)™ who wants to change the world? Learn more about what Girl Scouts do every day.

Cassie shows the meaning of “never give up” in her fight against child marriage.

See how these inspiring Gold Award projects make the world a better place!