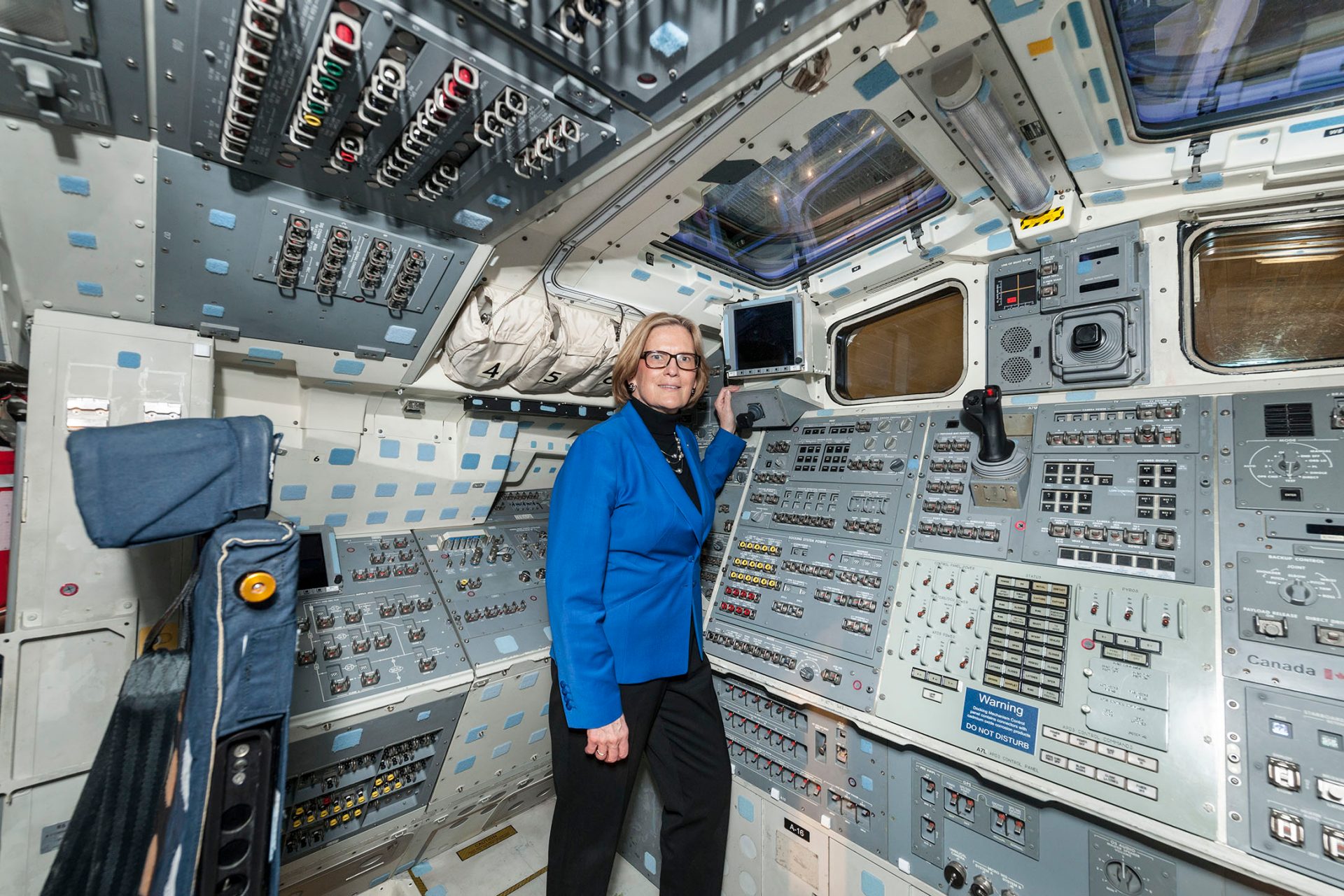 Kathryn Sullivan was always a pretty adventurous kid. Her mother, who wasn’t as outdoorsy as Kathy, signed up to be her Brownie troop leader because she figured if she served when the girls were little, she wouldn’t have to camp so much.

But Girl Scouts appealed to Kathy in other ways than just her sense of adventure.

“I’m a goal-oriented person by nature,” she says. “I remember working on badges and quickly filling up my sash.”

And while she hadn’t always planned on becoming an astronaut, she watched the coverage of early space expeditions on TV and loved the idea of trying something new and figuring it out. “There was no script, and I was mesmerized by that,” she says. “It elevated the standards I set for myself in school. From that point on, school was something that seemed to be a pathway to the kind of life I was imagining.”

She drifted away from Girl Scouts in middle school, but high school friends on her volleyball team were part of a Girl Scout troop that focused on sailing, and they invited her to join. She quickly discovered a love of being out on the water and eventually decided to go to grad school for oceanography.

But in 1976, she was celebrating Christmas at home in California when her brother mentioned NASA’s search for scientists and engineers.

She was intrigued. There were 9,000 applicants for what turned out to be 35 spots in NASA’s Class of 1978. It was a “draconian winnowing down,” she says of the application process, but eventually she secured one of the spots.

“Our class was the first to include anyone who wasn’t Anglo and male. There were six women, three African Americans, and one Asian American,” Sullivan recalls. “We were confident that we got in on the same standards as our classmates, and they felt that way too. We got a good and supportive reception.”

Of course, the first day they walked in the door, they faced a new challenge: proving themselves.

After attending a condensed “grad school” for astronauts, all 35 students were assigned support roles. “You help test software and flight suits and handle experiments for the upcoming flight,” explains Sullivan. For the next 14 to 18 months the class learned how a space flight comes together.

“When you’re in a spaceship, there are 1,000 people on Earth working to support you and it’s important to understand that ecosystem,” she stresses.

Finally, the class members were each assigned a mission with fellow crew members and given a syllabus. Then the team refines how to work together efficiently. “Every minute in space is precious time and … scheduled ambitiously,” Sullivan adds. “It’s not a joyride. It’s a fast pace on a shuttle.”

Space shuttle flights are five- to 10-day expeditions, and scientists on the ground depend on the research done in space for the next five to 10 years of their work.

And while the pace is rapid, it’s also a time you know you’ll never forget. Case in point: in October 1984, Sullivan was the first American woman to do a space walk.

“Spacewalking is a very cool thing to get to do, but ‘walk’ is the wrong word,” she reflects. “You’re moving like a scuba diver, walking hand over hand. And you anchor your feet when you get to a work site.

“It’s the world coolest jungle gym, and you’re miles above the Earth, so you get these glimpses of the earth sliding by beneath you.”

She was a crew member on three space missions, including the Space Shuttle Discovery mission in April 1990 that deployed the Hubble Space Telescope. “I’m most proud of the role I had on Hubble,” she says. The telescope takes photos from space of Earth, stars, and other planets and galaxies. “It changed our view of the universe and inspired and amazed countless people. Anyone who was on Team Hubble feels that way.”

Sullivan stayed with NASA until the early 90s, when she returned to her other love, oceanography. Since “retiring” from government service in 2017, Sullivan has written a book called Handprints on Hubble: An Astronaut’s Story of Invention, which will be published later this month by MIT Press.

She is also a member of AstraFemina, a non-profit that works to inspire girls to explore STEM careers. While Sullivan believes NASA was welcoming to women even during her years there, women are still achieving firsts. In October, American astronauts Jessica Meir and Christina Kock led the first all-woman space walk as they performed repairs on the International Space Station.

For women who want to follow in these pioneering footsteps, Sullivan believes staying focused on your goals makes a difference as you navigate school and the early years of your career. “Keep your eye on the far horizon,” she says, adding, “The more often that you say ‘I wonder if I can’ instead of ‘I bet I can’t,’ the better off you’ll be.”

Persevere in a Male-Dominated Field

Gwen Rudie learned as a Brownie that the sky was the limit.